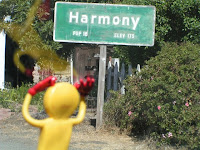 I came across an interesting article "Ministry Lessons from Muslim" on an approach to pluralism that seeks to "love our neighbour" without compromising on loving God will all our hearts. I think it is worth some further reflection and consideration. This question of how we are to live with those of other faiths is a reality for us who live in multi-ethnic and multi-religious Singapore.
Of late, the spotlight has been turned on us as Christians, and how we live in a "secular" society. I myself have problems with the concept of a "secular" society because most often the underlying assumption is that for us to live with others, we have to "dumb down" who we are and what we believe. This so-called society is one in which everyone joins hands, singing "I'd like teach the world to sing, in perfect harmony". Where there is no conflict, because there are no strongly held views that impinge on another. In fact, many who espouse this view of "secularism" in reality put forward their own value system that minimalises any sort of religious belief, and they do it "religiously".

As an aside, that popular song of the 70's began as a jingle for that giant of globalisation, Coca-Cola. It included the line "I'd like to buy the world a Coke" and the refrain "It's the real thing". These of course play right into their goal of selling more so that they can gain more, another "religious" view which actually has many more adherents than any other religion in the world!
This type of approach to living in a plural (the word I prefer over "secular") world really denies and denigrates people and their beliefs. It assumes neutrality should be the goal for all. The problem is who defines what is "neutral"? We are complex creatures, and we are the sum of all our experiences and upbringing. To deny any of it is to be less than who we are, or to lapse into some kind of surreal, superficial "common ground" which really is a place where no one feels comfortable.
Don't misunderstand me, I do not support any person (or organization or corporation) that seeks to force their beliefs on another. Not only is it obnoxious, it is also incapable of changing anyone. Such a push, always results in a push-back, or in Newtonian terms, "an equal and opposite reaction" (Just look at what is happening in Urumqi, China). Yet what many people seem to think is that the solution is to take the opposite approach. They believe that lowering ourselves to the "lowest common denominator" will allow for greater harmony. I think that this actually leads to less understanding, because we only know the other person superficially. They cannot be themselves. It is a pale shadow of who they really are. So what is the solution?
The article points out that there is another way:

In our increasingly secular society, many people have come to view religion as a problem and the source of conflict between groups. This sentiment was popularized in John Lennon's 1971 song "Imagine," in which religion is presented as an obstacle to world peace and harmony. But Eboo Patel is helping these seminary students turn conventional wisdom upside down. He sees the potential for greater cooperation and coexistence by embracing our different religious identities, not abandoning them.

"If you enter a ministerial gathering as a Christian minister and downplay your Christian identity in an attempt to make everyone comfortable," says Patel, "as a Muslim leader, I'm immediately suspicious. I don't trust you. Embracing your identity as a Christian creates safety for me to be a Muslim."

I think that this is where we need to head. I know that it is not easy, but it is necessary.
Posted by Jon W at 9:46 PM No comments:

To be honest, I don't know why tourists are so fascinated with the Merlion.
Posted by Jon W at 3:48 AM No comments: