Nobody Loves Me, Everybody Hates Me

It sure seems like a bad time to be a Christian. Especially one who is serious about what he believes...

If you don't believe me, just ask Abdul Rahman, the Afghan Christian convert on trial for switching religions. He's damned if they convict him, and damned if they don't because there's a lynch mob waiting for him if he's released.

I've also just done a book review on the persecution of Christians entitled "Their Blood Cries Out" which is a little dated (published in 1997) but is still moving in its accounts of the ferocious attrocities perpetrated against followers of Jesus.

This opposition is just about every where. In an editorial entitled "Cutting at Christianity" by Nora Gallagher in the LA Times on March 24, 2006, the author said, "It's become fashionable to take shots at the Christian religion. In a lot of otherwise civilized circles, the faithful and the faith itself are an easy object of prejudice; and worse, it's a prejudice you can get away with."

She ends the op-ed by pining for the "good old days" of pre-Constantine Christianity. She thinks that there were kinder gentler times in Jesus' day. But listen to what he said...

How 'bout them Reds? 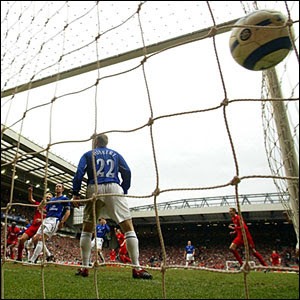 Amazing stuff. They beat Everton their cross-town rivals with only 10 men! 3-1 was the final score and it was sweet!
Posted by Jon W at 11:41 AM 3 comments:

This is probably the clearest signal from Canterbury about the impending fate of the Communion. The Bishop of Exeter, representing the Archbishop of Canterbury, was speaking at the ECUSA House of Bishops retreat at Kanuga. He said:

"'I suppose one of the major challenges for the Episcopal Church now has to do with whether there are enought of you to stand broadly on the same ground, holding a range of opinions on Lambeth 1.10 but firm in carrying forward the Windsor vision of a strengthened and enabing communion life. This, I believe, is the key question rather than questions about whether the Episcopal Church will either be pushed out of the Communion or consciously walk away. Let's be clear. On the one hand, noone can force another province or diocese either to go or remain. We are not that kind of church. Yet equally, no diocese or province can enforce its own continued membership simply or largely on its own terms. There has to be engagement There is no communion without a shared vision of life in communion. So it does seem to me, as I listen to those other parts of the communion that I know best, that any further consecration of those in a same sex relationship, any authorisation of any person to undertake same sex blessings, any stated intention not to seriously engage with the Windsor Report, will be read very widely as a declaration not to stay with the communion.'"

A report of what sort of went on there can be found on Ruth Gledhill's Blog - Times Online: Schism looms, Exeter warns US bishops:

I know that many of my Episcopal colleagues here at Trinity look towards the General Convention in June with some anxiety. To be honest, I see very little signs of ECUSA repenting as was called for in the Windsor report.
Posted by Jon W at 9:38 PM No comments: 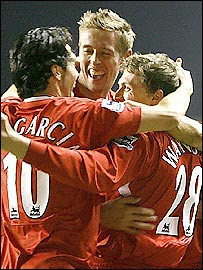 Liverpool routed Fulham yesterday, 5-1. I watched the delayed telecast and it was truly entertaining. You might have noticed that I haven't been posting much on football (the real kind played with feet) lately, because honestly, my team hasn't been doing too well. But now they seem to have picked up where they left off. Great to see almost all the forwards getting a goal each. Especially delighted with Fowler's goal!


To Fulham's credit, they really put in a good game, but once the Liverpool strikers got off the mark, there was no stopping them. I was particularly impressed with the young signing, centre-half Daniel Agger who deputised for the injured Hyppia. (A Dane for a Fin) 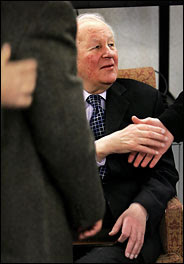 This is one man who has made a difference in the world!

PZ circulated a NYT article on John Stott, the elder statesman of the evangelical church, at one of our Dean's hours. I have always been impressed with his writings, and I admit that I often gravitate to his commentaries, when I come across them. He's been a tremendous influence on many others as well. I know that he had quite a bit of input in my father's life, and the life of my bishop, as well as many other church leaders in the global South.

I remember meeting him in Amsterdam 2000 and he was so very accessible. When I told him who I was, he greeted me warmly (and gave me a big hug, something which I still have a tough time getting used to as an Asian). He's one of the giants of the Church with an incredibly humble disposition. Truly a man of God. And I don't use that term lightly!
Posted by Jon W at 12:47 AM No comments:

An Ounce of Prevention

This past week, I was really alerted to the "great" journalistic value of Parade by Bp. Fitz Allison. As I opened the publication on Sunday (which comes with our Sunday paper), an article jumped off the pages at me. I really believe in what he's doing. It goes to the heart of the problem in terrorism, and though results are slow, I think the solution will be long term! (In fact Mortenson's book, Three Cups of Tea is all about taking the time to see lasting results)

The actual article will only be available online on Wed March 8, but this is an earlier one about what he's doing:

PARADE Magazine | He Fights Terror With Books (Greg Mortenson of Central Asia Institute): "Tucked amid a grove of poplar trees at the edge of emerald barley fields in Korphe, an isolated village in northern Pakistan, stands a tiny four-room school. This afternoon, a 17-year-old girl is about to confront Greg Mortenson, the American who built it. Her name is Jahan, and her intention is to remind Mortenson of a pledge he made to her when the building opened in September 1996.

“Do you remember the promise you made that day?” Jahan asks in Balti, the local language. “I told you that I want to be a doctor, and you said you would help. You fulfilled your pledge to us when our school was built. But today you must keep your promise to me. I’m ready for medical training, and I need 20,000 rupees [$400] to attend a maternal health-care program.”

Her request marks an extraordinary milestone in the 600-year history of the Braldu Valley. The narrow Braldu stretches high in the Karakorams, a spectacular range of granite mountains that straddles the border between India, Pakistan and China, where snow leopards roam across blue-ice glaciers. The Braldu is a place of equally spectacular isolation and poverty: The majority of its 3000 people are illiterate; one of every three babies dies before its first birthday; and local power rests in the hands of Shiite mullahs who take religious orders from the ayatollahs of Iran.

Korphe, though, is different. For, in this part of northern Pakistan (see map on page 6), a region that now sits on the front lines of the war against terrorism, Jahan is the first girl ever granted the privilege of learning to read and write.

The man to whom Jahan makes her petition is sitting cross-legged in the middle of a council of village elders. As the U.S. confronts Saddam Hussein’s regime in Iraq, Greg Mortenson, 45, is quietly waging his own campaign against Islamic fundamentalists, who often recruit members through religious schools called madrasas. Mortenson’s approach hinges on a simple idea: that by building secular schools and helping to promote education—particularly for girls—in the world’s most volatile war zone, support for the Taliban and other extremist sects eventually will dry up..."