What if the Medium really is the Message?

An article by Shane Hipps on Out of Ur:

"Whenever we in the church debate new methods of communicating the gospel, or alternative ways of doing church it ends in a predictable turn. There is a point in these conversations when a person, hoping to end the debate once and for all, says “The methods must change as long as the message stays the same.” So it would seem as long as we preserve the unchanging message, any method is fair game. This serves as a kind of evangelical rally cry for methodological innovation.

If they are feeling particularly sophisticated, they may go on to explain that, “Our methods, in and of themselves, are neither good nor evil, it is how we use them that determines their value.”

Meaning, if we pipe pornography through the Internet it’s bad, but if we post the Four Spiritual Laws there the Internet is good. We assume that any medium is simply a neutral conduit for information, like the plumbing in our house. The tubes are of little consequence unless they spring a leak. So as long as we are communicating the unchanging message of the gospel, every technology or method can be good. This tends to be our most nuanced conclusion.

Unfortunately, it fails to account for what our media and methods truly have the capacity to do and undo. And so we encounter them with the proverbial slip on the banana peel. We remain quite oblivious to the ways our message and our minds are being shaped by our methods and media.

The reality is, our methods are in no way “neutral,” they have a staggering, yet hidden power to shape us regardless of their content. This is what Marshall McLuhan meant when he observed “The medium is the message.” And it stands in direct contradiction to our evangelical rally cry. In other words, our media and methods have an inherent bias and a message of their own that has little or nothing to do with their content..."

Click here to read the rest of the article.
Posted by Jon W at 2:35 PM No comments:

What did Luther say?

An excerpt from the article by Matthew Becker in this month's "The Christian Century":

"A recent New Yorker article on Mary Magdalene, obviously written with an eye on her role as Jesus' paramour in Dan Brown's best-selling The Da Vinci Code, began by noting that 'Brown is by no means the first to have suggested that Christ had a sex life—Martin Luther said it' (February 13-20). Bruce Chilton, an Episcopal scholar from Bard College, also makes this claim about Luther in Mary Magdalene: A Biography (2005). And a 2003 story in Time magazine declared that 'Martin Luther believed that Jesus and Mary Magdalene were married.' Did Luther really make these assertions?

... Seemingly problematic is a small notation from John Schlagenhaufen, one of Luther's close friends, which contains a recollection of something Luther supposedly said informally at his Wittenberg dinner table in 1532:

Christ [as] adulterer. In the first instance Jesus became an adulterer with the woman at the well in John 4, because they say (no one understands), 'What is he doing with her?' In the same way with Magdalena; in the same way with the adulteress of John 8, whom he let off so easily. In that way the godly Christ first of all must also become an adulterer before he died. (WA TR 6, 107, sec. 1472; cf. LW 54:154)

No one knows if Luther actually said this. The critical apparatus in the Weimar Ausgabe reveals the textual and grammatical problems in this supposed quotation. Schlagenhaufen recorded only a portion of what he remembered Luther to have said that day (and after how many beers?). No context is given.

Scholars know how difficult, if not impossible, it is to link the lapidary 'table notations' of Luther's friends to Luther's own views. The editors of the American Edition speculate in a footnote that the 'probable context is suggested in a sermon of 1536 (WA 41, 647) in which Luther asserted that Christ was reproached by the world as a glutton, a winebibber, and even an adulterer' (LW 54:154).

A more probable context is Luther's account of the atonement. One of his basic assertions is that our sins become Christ's and Christ's perfect righteousness becomes ours by faith. This idea of 'the happy exchange' is found in many Luther texts. Given his central soteriological and christological concern, the theological irony in Schlagenhaufen's remembered notation becomes clearer: The 'godly' Christ becomes or is made a sinner through his solidarity with sinners, even to the point of dying as a God-forsaken criminal on the cross. This is how Luther understood Paul's statement, 'God made him who knew no sin to be sin for us so that in him we might become the righteousness of God' (2 Cor. 5:21).

So Christ 'becomes' an adulterer, though he does not actually commit adultery with Mary or anyone else. He puts mercy front and center, and rejects the legalism which demanded that the woman caught in adultery be killed and the woman at the well and Mary Magdalene be shunned. The holy one becomes the sinner by putting himself into the situation of sinners, by loving and forgiving them, and ultimately by taking their sins on himself. For this gospel reason, Luther could also remark that God made Jesus 'the worst sinner of the whole world,' even though he also acknowledged that the sinless, righteous Christ actually committed no sin himself.

Trapped in a literalistic approach to Schlagenhaufen's contextless note, some readers have missed the metaphorical character of the remark, which Luther may have made, if he made it at all, with a twinkle in his eye. I'm confident that Luther would not be a fan of The Da Vinci Code—except perhaps with a beer in hand and that twinkle in his eye."
Posted by Jon W at 2:18 PM 1 comment: 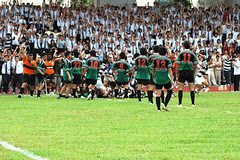 Photo was taken by Tan Teck Meng, Singapore.
The rugby team from my alma mater, St Andrew's Junior College beat our longtime rivals, Raffles JC 15-10 in the national competition in Singapore. This was especially sweet since it was a massive come from behind victory as heavy underdogs. The picture is of the winning touchdown having fought back from a 3-10 deficit in the 2nd half of the game. It has been 18 years since we last won the title.
Posted by Jon W at 3:04 PM No comments: