Liverpool beat Chelsea 2-1 in the FA Cup semifinals. It was kind of nail biting at the end, but the redmen managed to hold out for the crucial win.

Out of 10 meetings in the last two seasons, Liverpool have only beaten blues twice. Last year we knocked them out of the Champions League at the semifinal stage as well. They must really see us as a jinx team in their cup runs! As usual, their manager Mourihno was moaning and couldn't even congratulate Liverpool on being the better team! He is such a poor loser...
Posted by Jon W at 5:29 PM 1 comment:

A couple of months back I posted some stuff related to an online feud taking place between a couple of prominent pastors in the emrgent church movement. It ignited quite a furore and even led to a seminary professor questioning the benefit of blogging. Well here's the latest installment in the saga. Mark Driscoll the "offender" has offered his heartfelt "I'm sorry", but it has been painful reading some of the comments to his apology. While some have been genuinely supportive, there is still a large measure of unforgiveness that comes through which is such a poor testimony to the gospel!

"I observe that Christians don't even tolerate sinners, another 'other' for all their talk of forgiveness. It is a wondrous fact – an arresting fact – that when Christians fall into sin, the talk one hears literally every Sunday, in principle, of God's forgiveness and welcome to the sinner becomes a dead letter. It is as if we declare "God shows His love for us in that while we were yet sinners, Christ died for us" only to NOT mirror that, any time sin actually strikes close to us in a real live human being. It is an amazing reality that a sinner has about as much chance from Christians as Zontar did from the soldiers in It Conquered the World. (Zontar was burned to death, by the actor Lee Van Cleef.)" (from John Zahl's blog) 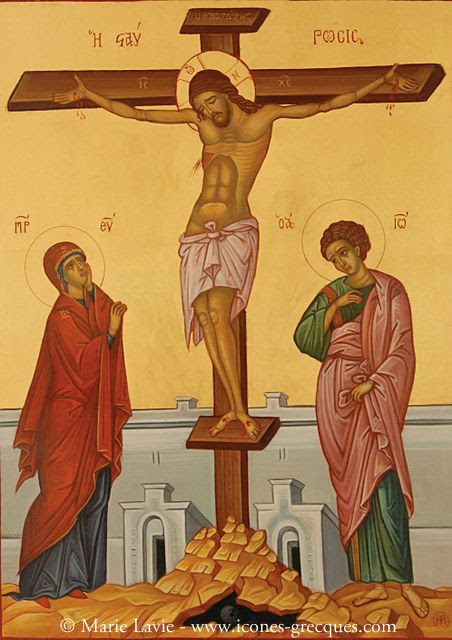 For the word of the cross is folly to those who are perishing,
but to us who are being saved it is the power of God.
1 Corinthians 1:18

I just read the New Yorker article by Peter Boyer, "A Church Asunder" after reading John Zahl's blog on it. It set me thinking about what our response should be towards the current crisis in our Communion. I still debate whether the revisionists of ECUSA are better classified (there I go labelling others again) as "Infidels" or "Hereticks" in Cranmerian terms. But the Good Friday collect reminds me that it doesn't really matter. I need to pray for them just the same.

Merciful God, who hast made all men, and hatest nothing that thou has made, nor wouldest the death of a sinner, but rather that he should be converted and live; have mercy upon all Jews, Turks (i.e. Muslims), Infidels and Hereticks [sic], and take from them all ignorance, hardness of heart, and contempt of thy word: and so fetch them home, blessed Lord, to thy flock, that they may be saved amongst the remnant of the true Israelites, and be made one fold under one shepherd, Jesus Christ our Lord; who liveth and reigneth, with thee and the Holy Spirit, one God, world without end. Amen.
The Third Collect for Good Friday
1662 Book of Common Prayer

At first hearing (or reading) this collect seems so un-PC. It raises our hackles and seems to run counter to all that we have been led to believe in relating to others in pluralism. But this is the crux of the gospel. This is the message of the cross. Paul Zahl unpacks the background of this prayer in his book on the Cramerian collects:

"The Jews believe in God, but reject Christ. The Mohammedans believe in God and honor Christ, but do not yield Him divine honor. Infidels are those who do not believe the basic doctrines of Christianity. Heretics are Christians who maintain religious opinions contrary to the teachings of the Church. This prayer is more a call to missionary work than a statement of judgment." (p.48 The Collects of Thomas Cranmer)

We're all sinners saved by grace, and in constant need of grace. And that is our motivation for mission. That is why we pray for those outside our congregations. This is why the day of Jesus' death is good. It is the "power of God unto salvation."

As we move through holy week, I have had a series of really interesting readings for a few different classes here. I was also recently visiting Dave's blog, who is a friend here at seminary (and fellow soccer fan...not!). He talked about the "Nazareth principle" in his post on Kant and Luther and it brought me back to something I read from Philip Jenkin's book, the Next Christiandom...

"Christianity grew as a grassroots movement, appealing to a rich diversity of groups. In some cases this might mean those on the margins of traditional societies. In his nuanced account of the conversion of the Igbo people of eastern Nigeria, Chinua Achebe describes how the faith gained its initial successses among the marginalized: "None of the converts was a man whose word was heeded in the assembly of the people. None of them was a man of title. They were mostly the kind of people that were called efulefu, worthless, empty men...Chielo, the priestess of Agbala, called the converts the excrement of the clan, and the new faith was a mad dog that had come to eat it up." Gradually, though, an increasing number of converts were drawn in from major families. (Today, the Igbo are overwhelmingly Christian.)" (p.43)

This gist of this story was repeated in my readings of how Christianity spread in Korea and China in the 19th and 20th century. The churches that grew the fastest and have had the most lasting impact are those that initially reached the lowest in society. It shouldn't be any surprise since the apostle Paul pointed out the fact that this is the basis of God's election:

For consider your calling, brothers: not many of you were wise according to worldly standards, not many were powerful, not many were of noble birth. But God chose what is foolish in the world to shame the wise; God chose what is weak in the world to shame the strong; God chose what is low and despised in the world, even things that are not, to bring to nothing things that are, so that no human being might boast in the presence of God. He is the source of your life in Christ Jesus, whom God made our wisdom and our righteousness and sanctification and redemption. Therefore, as it is written, "Let the one who boasts, boast in the Lord." 1 Corinthians 1:26-31

Could it be that it is the "down and outs" who are most receptive to the gospel? I imagine that they are the ones who can most easily accept the word that comes tellling us that we can do nothing to save ourselves. That's probably why Jesus said that it is easier for a camel to go through the eye of a needle than for the self-satisfied, self-sufficient and self-absorbed (my version of a three-self movement) to enter His kingdom...

This is the message of the cross. God came and identified with the down and outs, by subjecting himself to the ugliness of the cross...

He had no form or majesty that we should look at him,
and no beauty that we should desire him.
He was despised and rejected by men;
a man of sorrows, and acquainted with grief;
and as one from whom men hide their faces he was despised,
and we esteemed him not.
Surely he has borne our griefs and carried our sorrows;
yet we esteemed him stricken,
smitten by God, and afflicted.
But he was wounded for our transgressions;
he was crushed for our iniquities;
upon him was the chastisement
that brought us peace,
and with his stripes we are healed. Isaiah 53:2-5

Go to the Source!

Our Dean/President Herr Zahl, makes a strong case for the existence of Trinity. I firmly believe that the battle for the church will be won or lost in the seminaries. If we are to see the church turn around, we need to be more strategic in placing the right people in the right places, and I'm not talking about the episcopate (although that is important too).

But how do we break the politburo hold they have on our institutions? It is almost incestous the way in which they jealously guard their strongholds. Talk about a lack of inclusion...
Posted by Jon W at 11:46 AM No comments: