The Scandal of the Gospel 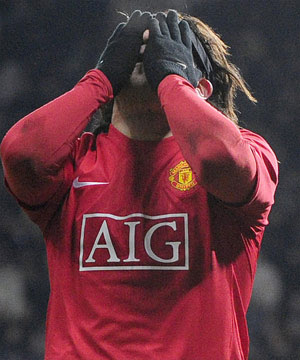 I found it interesting how Mark Galli, the managing editor of Christianity Today, drew a gospel lesson from the current furore surrounding the $165 million being paid out to high-leveled executives of the troubled insurance giant AIG (read all about it in The Scandal of the AIG Bonuses).

As a side note, I circumspectly offer the observation that they are the jersey sponsors of a team otherwise known as the "Red Devils" which leads me to think of "birds of a feather" and all that...

In any case, he wryly notes that this scandal is nothing compared to the scandal of the gospel; "while we were yet sinners, Christ died for us" (Rom 5:8). The "free bonus" of grace given to totally undeserving miscreants cannot help but incense the masses; unless we happen to be one of the villainous miscreants.

If the gospel we preach doesn't turn a few heads, and cause the man in the street to cry out at the scandal, the question begs as to whether what we proclaim is truly "good news"?

As Galli says in his conclusion...

I wonder if we are preaching the gospel if we don't scandalize a few listeners, maybe even ourselves, with the incomprehensible unfairness of it all. When Paul talked about the gospel, many were shocked and appalled. It sounded as if God wanted to reward sinners, to give a bonus to scoundrels! They scoffed, "Are we to continue in sin that grace may abound?" (Rom. 6:1). And when they figured out what exactly he was preaching, they got so angry that they told him to fall on his sword, and then formed a mob to run him out of town.

May we be as "scandalous" as Paul as we declare the gospel of the cross on which our Lord bled and died...for us!
Posted by Jon W at 10:05 PM No comments:

Pew Warmer,
originally uploaded by Jon W.
The Rev Dr Leander Harding was one of my professors in seminary. His keen sense of pastoral need and ability to sift through the flotsam of parish ministry is quite a gift, in my opinion. I recently came across a post on his blog about Ash Wednesday, and I reproduce a section from that post, " Thoughts on Ash Wednesday" here:

I have become more and more suspicious of the concept of the nominal Christian. Our parish churches are supposed to be full of nominal Christians who are just going through the motions, of half-believers who are relying on their good works and who have not really surrendered to Christ and accepted the Gospel. In any parish church there are a few real apostates, and a few real scoffers and perhaps a few who genuinely hate God. Their numbers are routinely exaggerated. Most of the people who come to the church Sunday by Sunday know they are dying and are placing their hope in Christ. It may be an inarticulate hope, it may be a confused hope. Often there are huge brambles of misunderstanding that must be cleared away before the whole power of the good news can come in upon them. Often there is real darkness into which the light of Christ has not yet come and which cries out for a light-bearer. Yet, they come. When Jesus saw such as these gathered in their multitudes on the hill side, the sight provoked in him not contempt for the nominal but compassion, “for they were like sheep without a shepherd.”