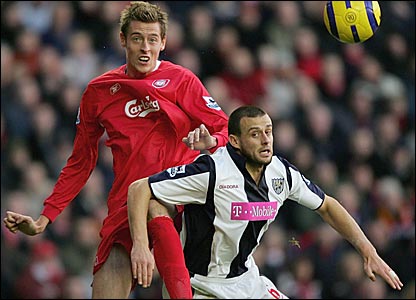 What a way to round out the year! Ten successive wins is a great achievement and it matches the '82 championship winning team. I couldn't watch the game live since it wasn't being telivised over here, but I managed to listen to the live commentary on the internet while studying for my Jan term class.

On another note, the holiday season is very different when you're away from home. I must admit that it's been a little subdued without our usual gang around us. jw.
Posted by Jon W at 12:26 PM 2 comments: Links to this post 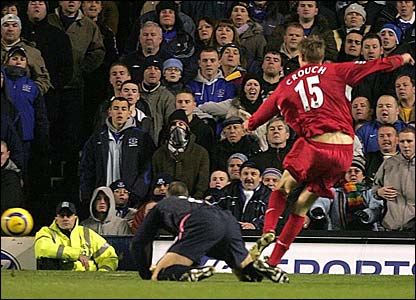 Liverpool have now won 9 straight league matches with their 3-1 trouncing of city rivals, Everton. It was a very one-sided game and the only real drama of the second half was trying to predict how many cards the ref, Graham Poll could show before time ran out. He did manage to send two Everton players off and I think he was just trying to liven up the game so that not too many Everton fans would leave the stadium before the whistle ;-).

I am looking forward to a perfect 10 tomorrow when they play West Brom at home in Anfield.
Posted by Jon W at 9:18 PM No comments: Links to this post

Living in the state where the Intelligent Design (ID) test case was fought in the law courts has been an interesting experience. I get to read more articles on the subject than I would if it had been residing elsewhere (Parochial American journalistic policy of favoring local news over news from elsewhere is the reason).

Many defenders of Darwin have cheered U.S. District Judge John E. Jones III ruling that the Dover school board were guilty of 'breathtaking inanity' in trying to force ID on high school students of the district. While they may crow that this is a triumph for science, I still struggle with seeing how that can be true. The way I see it, the judge's ruling is actually quashing true scientific endeavor. What he does is paint a box around science, narrowing it so that anything that cannot be explained from a purely materialistic point of view, cannot be brought into the equation irrespective of whether it is true or not. Am I naive?

In reading the many op-ed peices that have come out about this case, I came across one by David Klinghoffer entitled "It's God or Darwin" on National Review Online. I'm not that familiar with the NRO but I understand that it is quite out there on the right when it comes to its politics and opinions. So the general direction that the article takes is a given.

I am personally quite uncomfortable with extreme "creationism" as a movement (I think that they are misquided in their zeal). On the other hand, I find myself agreeing with what Klinghoffer (who incidentally is a conservative Jew) observes. He points out that the debate is not just between science and religion, it is actually a debate of two different religious points of view. It is Naturalism vs Theism. Both require faith. Both approach the arguments with different axioms. And ultimately both have agendas to push. For more on this issue, read Olsen's blog on Christianity Today.

Speaking of religions... Liverpool won their Boxing Day match in convincing fashion against Newcastle. Michael Owen, the former Anfield favorite son, who appeared for the 'bar codes' was pedestrian and was subject to some taunts from the Kop end. I admit that I would have joined them if I were there. I feel like he walked out on the LFC for selfish reasons and so he's missed out on the great Anfield revival! He was the one that chose to walk alone. He is reaping his just desserts.

So this makes it 8 wins in a row in the league. Even better, the 8 successive clean-sheets equals a club-record that dates back to 1923!
Posted by Jon W at 1:01 AM No comments: Links to this post

I feel a temperature coming on... Click here to get the schedule for World Cup 2006
Posted by Jon W at 9:13 PM 2 comments: Links to this post 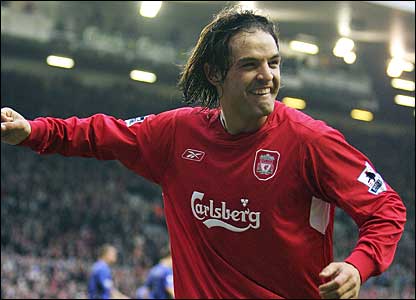 Liverpool have won their 7th consecutive Premier League game! A spotty first half despite their overwhelming dominance eventually gave way to a comforatble victory after the Spanish genius, Benitez made and inspired substitution. Morientes was truly on fire and his nose for goal showed!

They are flying high and it remains to be seen if they can lift the World Club Championships next weekend. For my friends from America, this is a real World championship with the champion club teams from Europe, South America, CONCAF (Central America, North America and the Caribbean refion), Africa, Oceania and Asia all meeting in Japan to decide the winner. Each of the teams won their respective continental championships earlier in the year. The seedings anticipate a final between Sao Paulo from Brazil and Liverpool to decide who goes home with the title of World Club Champion.
Posted by Jon W at 7:06 PM No comments: Links to this post

Came across an editorial on the Christianity Today site entitled "Intelligent Church Redesign". It is a commentary on the sad affairs of the state of mainline churches in the States and how schism may be the better way to go considering the heresies that have tied the churches in knots.

I too was of the same opinion before I got here, but after spending some time in dialogue with my Episcopalian brethren at the seminary, I realise that it is a complex issue that defies an easy solution. At the recent Anglican Communion Network cpmferemce (which is a network of the orthodox remnant within ECUSA) which I attended, I got a chance to see the complexities up close and personal. I met with all kinds of clergy from throughout the US. They represented every stripe and flavour of orthodoxy within ECUSA, as well as Anglicans who left because they couldn't wait for the reformationto take place. And it was interesting to hear their stories and to feel their pain.

It sort of reminded me of something a Jewish friend once told me, where you find 3 Jews, you'll find 4 opinions. Or to contextualize it, where you find 3 American Anglicans, you'll find 4 or more opinions. My dad was right, they really have to sort it out amongst themselves. Our out-going Archbishop Yong said to them in a panel discussion, "we are with you, as long as you hold fast to the faith once delivered and remain orthodox." (my paraphrase of course!) We from the Global South can only provide a clear voice, like one calling in the wilderness. But they have to repent and reform from within.

So, what's the solution? I think that quintessential Tyler Perry line is the best hope, "you've got to pray...ay...ay...aay..aaaay!"
Posted by Jon W at 10:05 PM 2 comments: Links to this post 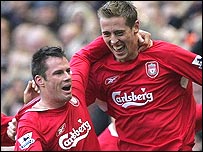 Liverpool have won their 6th consecutive league match. What's more, they are closing in on a club record of 10 clean sheets that has stood for 18 years. They currently have 8 and will be playing their 9th next weekend.

We'll have to wait till after Christmas to see if they make it since they head to Japan for the World Club Championships after that for 2 weeks.

On another note, Crouchie finally broke the duck with two goals. One of them splendid the other a little dubious. But both equally sweet! I think that he's going to be a legend for LFC. Yes, I know he isn't pretty to look at (both as a player and person) but if you can remeber back that far, Rush wasn't really all that refined a player either! But he got the goals when it counted... and I believe that Crouch will too in time to come.
Posted by Jon W at 9:30 PM No comments: Links to this post

I was in the town of East Liverpool, Ohio this past weekend for a class assignment. It is a place that has seen better days. As we were walking the streets yesterday, one could see that it was once a really prosperous and bustling hamlet on the Ohio River. It was renown in the Western Hemisphere for its pottery. Many of their artisans had come from the famous Stoke-on-Trent and brought with them their expertise. In later years steel and titanuim mills/foundaries rose in importance for the local economy. However over the years, competition, cheap imports and other economic exigencies eroded its place in the world.

Where we are in Ambridge is somewhat similar. The town got the name from the company, the American Bridge Company, who built the twon around a huge steel mill. They are best known for building the famed Golden Gate Bridge in San Francisco and the the Verrazano-Narrows Bridge in New York. But when the mill went bust back in the 60's it started the slow but sure decline of the town.

Towns like these litter the entire Ohio River Valley. I am sure that its the same all over the US as well. Talking to the older inhabitants will get you story after story of the "good old days." Accounts of stores that had people lining up down the block to get in, churches full with barely a seat on a Sunday morning, life and wealth oozing from every street corner.

Some may say, that this is price of progress. It is the way of capitalism. It is economic Darwinism at its best... or worst???? It's just business after all. But there are lives at stake. And families are affected.

When the pursuit of coin usurps as the main agenda, the result is a bankruptcy that knows no limits. The system that we have sold our souls to will gladly wring every last drop of blood out of people and spit out the empty carcasses.

I wonder what our grandkids or maybe even our kids will think when they visit Silicon Valley, or Austin or any number of hot "new economy" hubs in the not too distant future. Will they shake their heads at the old man reminiscing about the "good old days"? I'm not even sure my hometown, Singapore will necessarily be spared.

Money is a good servant, but an incredibly poor master. Or in reality this is just another example of the total depravity of man! jw.
Posted by Jon W at 8:17 PM No comments: Links to this post