Lost in the Noise 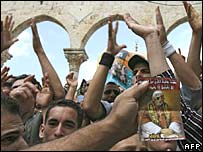 The recent furore over the Pope's speech in the Muslim world has caused many (if not most) to lose sight of what he was really trying to say. As is typically the case, the noise often drowns out the real message. In essence, what the pope was trying to tell his audience, who were mainly a group of secular university elite, was that if there was going to be a "genuine dialogue of cultures and religions," the relationship between reason and faith had to be re-examined. He concluded his address by saying:

In the Western world it is widely held that only positivistic reason and the forms of philosophy based on it are universally valid. Yet the world's profoundly religious cultures see this exclusion of the divine from the universality of reason as an attack on their most profound convictions. A reason which is deaf to the divine and which relegates religion into the realm of subcultures is incapable of entering into the dialogue of cultures.

Ironically, his very call for dialogue brought the heart of the problem he was trying to address to the fore. The Western media guided by their positivistic reason demonstrated its problems by the way they reported the speech. They lifted a quote from the address that was sure to generate maximum conflict, regardless of the fact that it was used totally out of context and totally contrary to the gist of what Pope Benedict was trying to say. Conversely, the response from the Muslim world similarly showed once again how faith divorced from reason can lead to unruly behaviours.

One of my professors, the Revd Dr. Leander Harding, has written a brilliant analysis of the Pope's address. He compares what the pope said with Michael Polyani's concept of "moral inversion" and points out that reason without faith or faith without reason both lead to perversions of morality. And when carried to its logical (or illogical) extreme, results in violence.

If we read Polanyi and the Pope together we can see that the apocalyptic violence of the totalitarian movements of the secular West in the 20th century and the violence of Islamic Jihadism have a strong family resemblance. The both reject in the name of utopian visions the concept of universal moral principles to which as St. Thomas says, “even the Jew and Muslim must agree.” Both European totalitarianism and Jihadism reject any reasoned critique of their utopian project. Both Polanyi and the Pope argue that there is no way out of this impasse without a rehabilitation of the role of reason and a redefinition of the relationship between faith and reason. If the choice is between an unreasoning faith and an unreasonably skeptical secular reason which brings in its train nihilism, the world is presented with a choice between moral despair and utopian fanaticism in both secular and religious forms, with no possibility of a mediating dialogue. This is not the way forward for reason or faith or the human race.

(Click here to read the rest of his blog...)

The notorious Jerry Fallwell made a quip that conservative voters (who are of his ilk) fear Hilary Clinton more than they do the devil himself. He meant it to be a humorous quote in a closed door meeting, but unfortunately I fear that he is more right than he probably cares to admit.

"'I certainly hope that Hillary is the (2008 Presidential) candidate, she has $300 million so far. But I hope she's the candidate. Because nothing will energize my [constituency] like Hillary Clinton.'

Cheers and laughter filled the room as Falwell continued: 'If Lucifer ran, he wouldn't.'"

What does this say about the state of Christianity (esp. amongst Evangelicals here in America)? I am more saddened by the fact that most people here in America don't take Satan seriously enough and that any person (even those you disagree with) should be so "demonized".

"For we do not wrestle against flesh and blood, but against the rulers, against the authorities, against the cosmic powers over this present darkness, against the spiritual forces of evil in the heavenly places." Ephesians 6:12
Read the whole article here...:
Posted by Jon W at 5:23 AM No comments: Links to this post

A Crisis of Trust Takes a Toll on Chinese Society

This article from the Los Angeles Times puts a spotlight on the reality of living in a fallen world. This is yet another example of the depravity of man and the effects of original sin...

Crisis of Trust Takes a Toll on Chinese Society:
"Talk about swimming with sharks.

Zhang Xingshui, an attorney with the Beijing Kingdom law firm, knows that like people everywhere else in the world, the Chinese don't always trust lawyers, who often promise things they can't deliver. But in China, he says, lawyers don't trust their clients, who like to skip out without paying. And neither trusts judges, who routinely disregard the law in favor of politics when rendering decisions.

'Living in such a society is tiring for everyone,' Zhang said. 'You're forced to be vigilant so you don't fall into pits, which are everywhere. Everybody is a victim and at the same time an offender.'"

Click here to read the rest of the article...
Posted by Jon W at 3:28 AM No comments: Links to this post

If you had any doubt that the Anglican church is facing a major crisis, read this...

Hinduism no barrier to job as priest in Church of England

"A PRIEST with the Church of England who converted to Hinduism has been allowed to continue to officiate as a cleric.

The Rev David Hart’s diocese renewed his licence this summer even though he had moved to India, changed his name to Ananda and daily blesses a congregation of Hindus with fire previously offered up to Nagar, the snake god. He also “recites Gayatri Mantram with the same devotion with which he celebrates the Eucharist”, according to The Hindu, India’s national newspaper.

The Hindu this week pictures him offering prayers to an idol of the elephant god Ganesh in front of his house. However, he still believes he is fit to celebrate as an Anglican priest and plans to do so when he returns to Britain..."

To read the rest, click here.
Posted by Jon W at 8:25 PM No comments: Links to this post

The God of China

I came across this article about how the late Mao Zedong has been turned into a deity in communist (and previously aetheist) China. Some villagers in a rural province even claim that 3 miracles happened in their village on the 100th anniversary of his birth in 1993.

Imagine that... he could even become a candidate for beatification and eventual canonization if only China would recognize the Vatican!

It's as the great reformer, John Calvin said, "The human heart is a factory of idols...Everyone of us is, from his mother’s womb, expert in inventing idols."
Posted by Jon W at 9:11 PM No comments: Links to this post